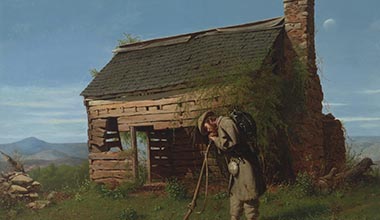 Romantic Spirits: Nineteenth Century Paintings of the South from the Johnson Collection features 38 paintings, created from 1810 – 1896, chronicling the cultural evolution and concepts of the romantic movement as it unfolded in fine art of the American South. Having its genesis in European literature and art, romanticism found its way into the cultural output of the young republic, both North and South.