A Retrospective of Eliot Clark 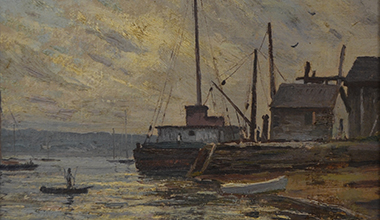 Eliot Candee Clark (1883-1980) was born in New York and was poised to become a prominent artist at a young age. After a rock was thrown at his head and cracked his skull at age eight, he became bedridden for a time and immersed himself in his art. After his recovery, he exhibited at the New York Watercolor Club, the Society of American Artists, and the National Academy of Design, where he eventually became an active member, exhibitor, and president (1956 - 1959). Influenced by his father and mother, both artists, Clark graduated high school at 15 and traveled the world, from France and India to Georgia and North Carolina, and painted plein air along the way. He became best known for his naturalistic landscapes, but was also a skilled writer and published several books on artists and arts organizations of his age. Clark died at the age of 97 in his second home in Charlottesville, Virginia, but his paintings remain in collections across the country, including the Metropolitan and Smithsonian. The works displayed at the Museum were loaned by Lamont Hudson, a close friend of Clark, and showed a broad range of his work.